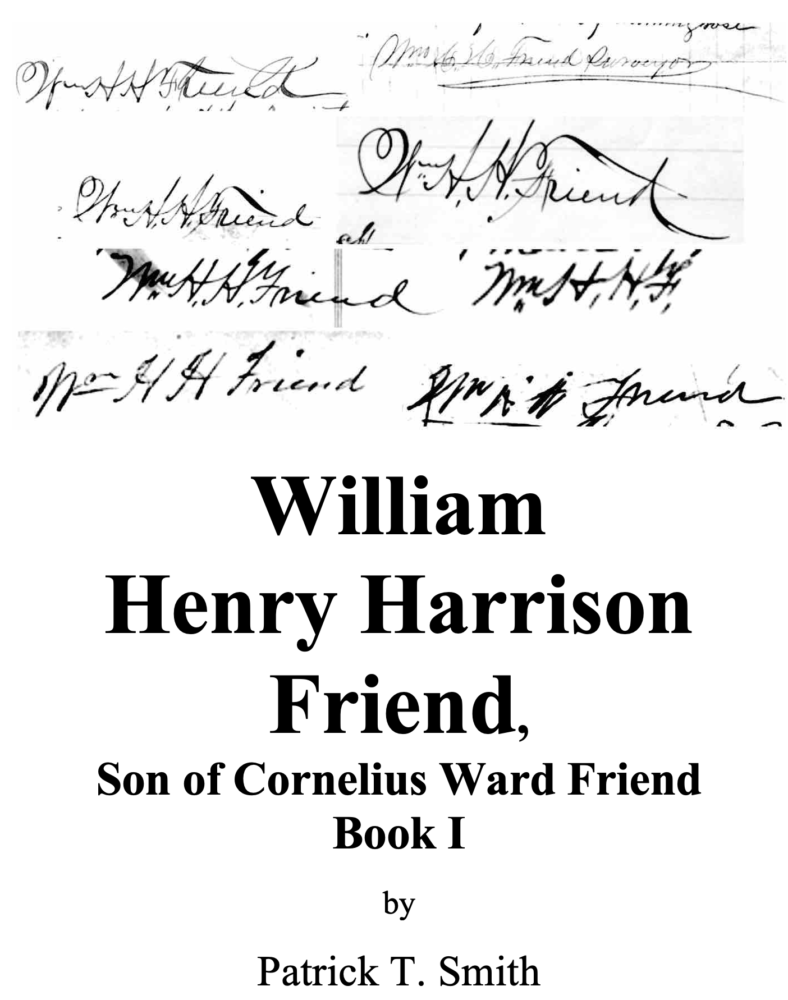 William Henry Harrison Friend was a soldier, farmer, civil engineer, husband and father. Several photographs have survived the passage of time, yet all those who knew William are gone. William was born in Belmont County, OH in 1840, the seventh child of Cornelius Ward Friend (1804 to 1884) and Sarah Kemp (1810 to 1887). He was the grandson of John Friend, Jr. (Abt 1764 to 1849) and Elizabeth Ward (1778 to 1845) and great grandson of John Friend, Sr. (Abt 1728 to Aft 1808) and Karrenhappuck Hyatt (1733 to 1798), the patriarchs of the Friend Family in Western MD. William’s family would move from Ohio to Western Maryland while he was a young man. William and his extended family would be caught up in the American Civil War. He would serve in the Federal Army in Co. D, 3rd Regiment Potomac Home Brigade, Maryland Infantry and Co. B, 2nd Regiment Potomac Home Brigade, Maryland Infantry for over four years. William’s regiment would be captured, then paroled, in the Battle of Harpers Ferry in September 1862. William married several times and fathered at least eight children. He started as a farmer and would eventually become a civil engineer or land surveyor. A portion of these surveys have survived to the present day and can be found at the Friend Family Association of America Library and Museum in Friendsville, MD. This collection consists of dozens of surveys and correspondences of hand drawn maps, containing a precision and attention to detail, that is astounding. The land plats are in and around Friendsville, Maryland. This material was originally published in 2006 and revised in a second book in 2010. These books were built with birth, marriage, death, and burial records, then expanded with information from the US Census, family bibles, books, land deeds, wills, estate records, photographs, personal histories, and military records. The first chapter has a brief review on the Friend Family starting with Nils Larsson Friend (Frande), a Swedish immigrant who came to the new world in 1648. The family history proceeds through the generations, ending with William’s father Cornelius Ward Friend. The second chapter features information on William Henry Harrison Friend, his wives, Civil War records, personal stories and land deeds. The remainder of Book I presents, what I believe, William’s oldest child (William Henry Harrison “Harry” Friend) and his descendants. A second, and possibly a third, book presents the families of the remaining children (William Henry Harrison “Turkey Bill” Friend, Jr., Walter Silas Friend, Cornelius Ward Friend, Blanche Valerie Friend, Percy Simms Friend, Theodore McKinley Friend and Floretta Friend). A child is featured in one book will be briefly outlined in the corresponding books. The goal of these books is to preserve a small portion William Henry Harrison Friend’s history, and that of their descendants.

Patrick Thomas Smith was born in Oakland, Maryland and grew up in Western Maryland. Pat is a graduate of Frostburg State College (B.S.), West Virginia University (M.S.) and Texas A&M University (Ph.D.). Pat has published over sixty books on the Friend Family and is currently working on additional books. Pat is a member of the Friend Family Association of America the 1st cousin 4x removed of William Henry Harrison Friend, and lives in Frederick, Maryland.